Pampus and our native Kakaho (toe toe) are often confused. 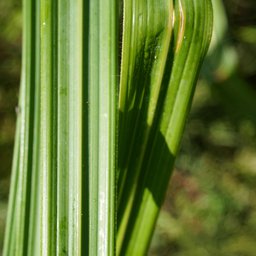 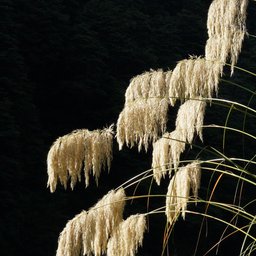 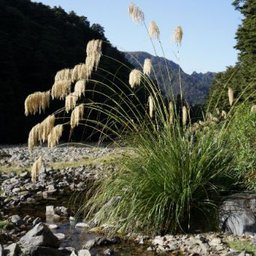 Grows up to about 2m depending on the site from the coast to the montane zone on cliffs, stream and road banks, in damp areas within forest clearings, and occasionally on dunes. It is endemic to New Zealand and occurs in the North Island (uncommon north of Auckland) and also Marlborough in the South Island. It has distinct secondary veins between the midrib and the edges of its leaf blades and creamy gold flower plumes on pendant stalks. It starts flowering in October or later (Dec-Jan) at higher elevations. It is common at Whatipū and on the Manakau Harbour cliffs where it has not been excluded by weed species such as the invasive Cortaderia selloana. Restoration Ruatuna has planted several by the stream in Western Park. 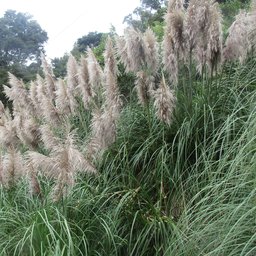 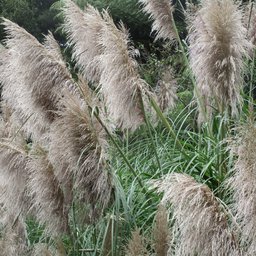 Pampus and our native toe toe are often confused. There are two invasive species (C. jubata and C. selloana). There are four natives species on mainland New Zealand plus one endemic to the Chatham Islands, but the one that grows locally is Austroderia fulvida. Both the native species and the pests are often referred to as cutty grass. Pampus forms large clumps, usually 2-3m high. It can be distinguished from the native species by its conspicuous leaf midrib, without secondary veins between the midrib and leaf edge ─ all the native species have secondary veins on both sides of the midrib. Pampus also has dead leaf bases that spiral like wood shavings, whereas the native species do not. Pampus has erect, dense, fluffy, white-pinkish flowerheads (Jan-Jun) that fade to a grey-white as seed forms. The flowers of the native toe toe vary among the species but the one that grows in the Waitakere Ranges has pendulous graceful flower stalks and light golden-yellow flowerheads (Sep-Jan).

Control options: Pull or dig out small plants. I find the best way to control large clumps is to cut them down as close to the base as possible and then spray the stumps with glyphosate using a 30-50% concentrate mix with penetrant. This method minimises spray drift and is more effective than spraying the leaves.