IMPROVING THE WORLD FOR BIRDS

One predator at a time

By Sam McClatchie on 29th September 2021

Imagine, just for a moment, that you could make a difference by doing something small in your neighbourhood. That’s what thousands of New Zealanders are doing all over the country by working together to trap invasive predators. New Zealand is a country of birds, but possums, rats, mice, hedgehogs, and mustelids (ferrets, weasels and stoats) have decimated the avian populations, and in many areas also damaged the native forests. New Zealanders are taking the country back, improving the world for birds, one predator at a time. All it takes is a little time, the right trapping methods, and enough neighbours.

New Zealand’s image of being “clean and green” is a bit of a myth. The country today is a highly modified environment, and one of the most profound modifications was the introduction of mammals. The government Department of Conservation has documented Australian brushtailed possum, not only seriously damaging iconic native trees like Pohutukawa , but also consuming birds eggs and even nestlings. In this video the Kea Conservation Trust documented predation by possum on a live kea nestlings.

Hedgehogs are often considered cute, and while they are protected in the U.K., in New Zealand, hedgehogs attack nests of wading birds on South Island braided rivers and eat large numbers of native invertebrates. Ship rats, Norway rats, and mice breed rapidly and their populations explode in years when the Sub-antarctic beech forests or the podocarp forests have what is called a “mast year”, when the trees produce huge numbers of seeds. These rodents are voracious predators, not only of birds eggs, but also of endemic insects like wetas and native skinks. Mice have even been documented on video gnawing the flesh of live albatross chicks.

Stoats, and other mustelids such as ferrets and weasels, are among the most vicious of the introduced predators. Their unusual reproductive system permits them to optimise their use of available food, and they feast on mouse outbreaks in mast years. They are also notoriously hard to trap.

There is an unusual aspect to predator trapping in New Zealand, that converts the effort into a citizen science project. Many people tally their trapping catches and enter them into databases. There are several applications available for recording and summarising trap catches. In some cases the apps also provide for noxious weed and bird counts.

The data themselves are enormously useful for tracking progress on reducing or even eliminating invasive predators from the landscape. In some cases, elimination is possible, and New Zealand has led the world in eliminating predators from offshore islands harbouring treasured native flora and fauna. Predator Free 2050 is a government funded program with wider aspirations that remains controversial. Whether it is ultimately possible to eliminate predators from NZ, or not, it is indisputable that neighbourhood trapping has the potential to reduce local predator numbers and improve the environment for bird life.

Animal behaviour is complex, and the success of neighbourhood trapping can be increased by using wildlife cameras to observe behaviour around traps. Camera footage acquired during trapping at Huia in the Waitakere Ranges proved to be illuminating.

In this video, rats investigated an automated Goodnature A24 trap. A possum then attempts to raid the trap, triggering the device, and yielding a false kill record. The following night, a rat was killed by the A24 trap and in the morning the carcass was scavenged by a cat, producing an actual kill with no carcass. Without video footage, it would have been impossible to know that there was one false kill and one real kill.

The next video solved a mystery where a live capture cage trap for possums was being triggered and it’s bait removed, but there was nothing caught in the trap. To determine who was responsible, I set up a camera. The answer is that rats trigger the trap and eat the bait, while mice, and a blackbird also eat the bait from both inside and outside the trap. The problem was addressed by setting up rat and mice traps near the cage trap.

Another problem was that bait was being stolen from a Trapinator possum trap. This video shows a large male rat stealing ferafeed bait from the Trapinator trap before a possum arrives. The solution was to put some rat traps near to the possum trap in order to kill the bait raiders.

In the next video example, bait was disappearing from a Goodnature A24 automated trap and a camera allowed me to determine that the culprits were mice. Proof that the trap was loaded and working is given by the demise of a hedgehog who tried the same trick as the mice.

Finally, motion-sensing cameras may pick up important predatory visitors that are not yet being caught. In this example, a stoat was captured on camera. This is very important information because stoats are trap-shy, and often only show interest in traps baited with a whole egg. They are the most damaging mammalian predator in NZ. 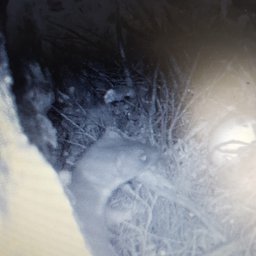 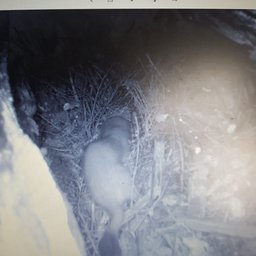 Screenshot from a video camera showing a stoat that had not yet been captured in a trap. Photo with permission of Dave Minty, Huia Trapping group.

After three years of neighbourhood trapping we now have over 1,000 catches at Huia, so we can pose some exploratory questions to the data. First, what are we catching? The answer is mainly rats and mice (Figure 1B and A), with far fewer hedgehogs (Fig. 1C) and possums (Fig. 1D). Rats are the most abundant catch (Fig. 1B). A second question is whether there is any seasonality to the catches? With four years of data, a seasonal pattern is clear for mice catches (Fig. 1A), but there is no clear seasonal pattern for rats, hedgehogs or possums. Mice are caught more frequently in the winter (Fig. 1A). There is also some indication that more rats are caught in the autumn or winter, although the patterns varies more between years when compared to mice (Fig. 1B).

Coding for this preliminary analysis was written in R using the tidyverse system. The full script can be downloaded here. An explanation of the code follows.

Raw data were exported from our Huia project on the Trap.NZ website. The data used by this code can be downloaded from here.

The data stored by Trap.NZ require some manipulation due to the way they are stored. Dates are stored as characters, and catches are stored inconveniently as a single variable called “Species caught” rather than as separate variables for each species.

The following code converts the exported data to a properly structured time tibble, with separate variables for each species:

Now the time variable can be used to group the data conveniently into quarter year seasons:

Next, plot the data:

This article describes a simple exploratory data analysis. There is much more that can be drawn from these data. We will explore that further in a subsequent article.

In closing, I emphasise that pairing cameras with traps adds an extra dimension revealing animal behaviour. Knowledge of animal behaviour around traps allows trapping strategies to be refined to make them more effective. Cameras may also reveal surprises, such as stealthy, hard to capture predators. With this knowledge, efforts can be directed to specifically target the trap-shy animals.

The collection and curation of data is very important for conservation efforts. Without data on catches it is impossible to develop metrics to index the success of trapping efforts. By pairing trapping catch data with environmental monitoring of bird song it is possible to determine whether neighbourhood trapping efforts are having the desired effect of improving the world for bird, one predator at a time.